HomeTreatmentsIs There A Blood Test For Parkinson's Disease
Treatments

Is There A Blood Test For Parkinson’s Disease

The process of diagnosing Parkinsons usually begins with the neurologist evaluating your medical history and performing a physical exam. For a formal diagnosis to be made, you need to have a general slowness of movement with either a resting tremor or rigidity.

During the physical exam, your doctor will have you perform a series of tests to monitor your movement. An example of a test they might use is a finger tap, where they measure how many times you can tap your finger in 10 to 15 seconds.

They will also look for signs that you may have another condition. A group of movement disorders collectively called parkinsonisms can produce symptoms that are indistinguishable from those of Parkinsons but are not the same. Usually, additional tests are needed to rule out these conditions as well.

A highly sensitive and specific blood test has been developed that can distinguish Parkinsons disease from multiple system atrophy , a team at the University of California, Los Angeles Health reported.

Based on the content and origin of the exosomes, this test can help discriminate between Parkinsons disease and MSA.

This is a major breakthrough, because it allows us to analyze whats going on in the brain using a blood test, Gal Bitan, PhD, the studys senior author and a professor of neurology at the David Geffen School of Medicine at UCLA, said in a university press release.

Parkinsons and neurodegenerative diseases such as MSA have several symptoms in common, including muscle rigidity and tremors. Because of this overlap in symptoms, many cases are misdiagnosed.

Incorrect diagnoses can also affect clinical trial results, as potential treatments would be tested in people without the disorder under evaluation.

Bradykinesia occurs in most people who have Parkinson’s. It may cause a lack of spontaneous facial expression and fewer eye blinks per minute than usual, and your healthcare provider will look for these signs in your physical exam.

Your practitioner also may assess your speed of movement by asking you to open and close each hand or tap your index finger against your thumb repeatedly, making large movements as quickly as possible. In people with Parkinson’s disease, the movement may start off fast and precise, but it will deteriorate quickly, becoming slow and limited.

Gait is also another way to test for this. Observing a patient while they walk, noting the length of their stride as well as the speed at which they move, can tell healthcare providers quite a bit. Lack of arm swing is also a feature that appears fairly early in those with Parkinson’s.

How A Diagnosis Is Made

A neurologist will make the diagnosis based on:

Looking For Signs Of Parkinsons 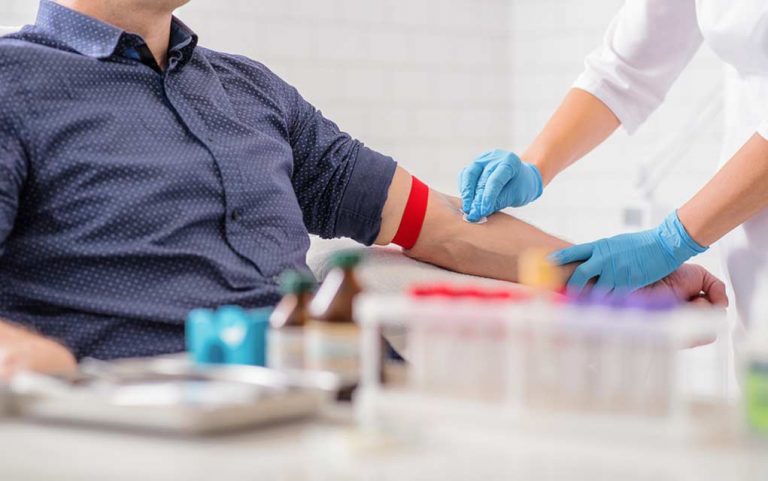 Your specialist will examine you to look for common signs of Parkinsons. You may be asked to:

The specialist will also look at and ask you about your:

As well as examining you for any of the typical signs of Parkinsons, the specialist will also look for signs that may suggest a different diagnosis.

It may be helpful to take someone with you for support when seeing a specialist. Taking a list of questions you want to ask can also be useful so you dont forget to mention something you want to know about. If a healthcare professional says something you dont understand, dont be afraid to ask them to explain what they mean.

The diagnosis of Parkinson’s disease relies on expert opinion. Autopsy studies, however, have demonstrated that even experienced neurologists misdiagnose Parkinson’s disease in about a quarter out of a hundred cases. Diagnostic accuracy at disease onset, when neuroprotective treatment is anticipated to be most effective, is even lower. Thus, there is a crucial need for biomarkers that are disease-specific and which precisely identify early disease stages.

Still, Wright is hopeful and believes a biomarker test for Parkinsons will be down the line. In general, researchers are looking for biomarkers of disease.

Specialists and sub-specialists are available only in big cities, Wright said, and access to a simple blood test would enable a correct diagnosis in a primary care office.

We always assume theres luxury, Wright said. But thats not really whats real in most of the country.

What Are The Diagnostic Criteria For Parkinsons

Doctors diagnose Parkinsons clinically based on your symptoms and medical history.

No individual test can be used to diagnose Parkinsons. Many other neurogenerative conditions can lead to similar symptoms, so your doctor may use a blood test, brain scans, or other tests to rule out other conditions.

Is there a test my physician can do to confirm a Parkinson’s disease diagnosis?

A trip to the neurologists office often includes what seems like dozens of questions, along with multiple tests.

There currently are no diagnostic blood tests for Parkinson’s disease, but your healthcare provider may do some routine blood and urine tests to assess your overall health. Your blood pressure will be taken sitting and standing to look for orthostatic hypotension.

A movement disorder specialist will do a variety of physical tests to assess you as well.

Brain Imaging And Other Tools To Aid Diagnosis Of Parkinsons

In addition to taking a history and performing a detailed neurologic examination, physicians sometimes use brain imaging to help support a particular diagnosis. However, these studies have their limitations in the diagnosis of Parkinsons disease and are typically used only in select patients. Brain imaging is not routinely performed by neurologists or movement disorder specialists when they are considering a diagnosis, especially if the persons symptoms strongly suggest to the physician that idiopathic Parkinsons disease is the correct diagnosis.

Helping diagnose Parkinsons with DaTscan and other tests

Rather, use of imaging is most helpful when the diagnosis is uncertain, or when physicians are looking for changes in the brain that are more typical of one of several Parkinsonian syndromes and other conditions that can mimic Parkinsons. Imaging studies to evaluate Parkinsons disease and Parkinsonian syndromes include magnetic resonance imaging , which examines the structure of the brain, and DaTscan, an imaging test approved by the Food and Drug Administration to detect the dopamine function in the brain. A DaTscan may help differentiate idiopathic Parkinsons disease from certain other neurologic disorders. Most physicians offices will have access to MRI however, DaTscan imaging may only be available at larger hospitals or medical centers.

Researchers have developed the worlds first blood test that can detect the abnormal metabolism of blood cells in people with Parkinsons disease, which means the blood test could be used to diagnose the disorder.

At present the only way to diagnose Parkinsons disease, a degenerative neurological condition, is through ordering a range of tests and scans to rule out other disorders, combined with examining symptoms.

Patients are often diagnosed only after they have developed symptoms and brain cells have already been destroyed. While there is no cure for Parkinsons, early detection allows treatment with medication and physiotherapy to begin, which may slow the deterioration of motor functions in patients.

Because diagnosing the disease is a process of elimination, and the symptoms mimic those of other neurological disorders, patients are also at risk being diagnosed and treated for the wrong disease.

The group of Australian researchers from La Trobe University believe their blood test will enable doctors to detect Parkinsons disease with unprecedented reliability and lead to earlier treatment. Their findings are under review by an international medical journal.

The lead researcher on the study, Prof Paul Fisher, said the discovery turned conventional understanding about Parkinsons on its head and had shocked the researchers.

What Should You Know About At

Even if you or a loved-one test positive for a Parkinson’s gene, it does not mean either of you will develop it. Having a genetic mutation only means that you may be at increased risk to develop PD. Environmental factors and lifestyle choices will help determine whether someone will get Parkinson’s. 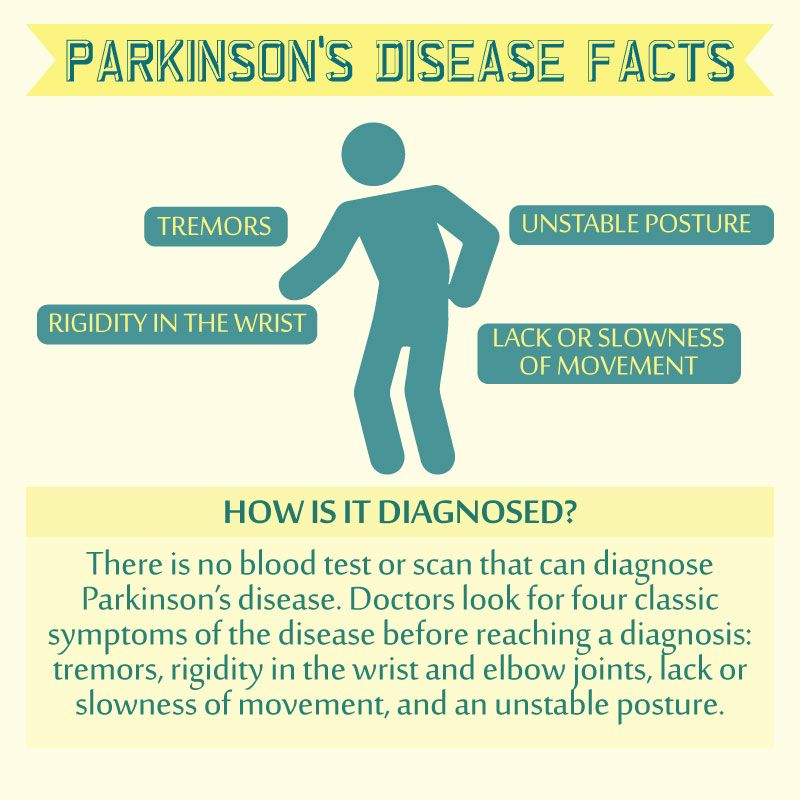 Your specialist may suggest you have a scan to help make a diagnosis. However, scans alone cant make a definite diagnosis of Parkinsons, so they are not commonly used.

How It All Fits Together

Diagnosing Parkinsons disease can be tricky. The process relies heavily on your doctors judgment. In addition, the causes and risk factors of Parkinsons are not entirely clear yet, which contributes to the difficulty in diagnosing this condition.

However, there have been efforts to try and detect this disease earlier. For instance, clinicians have started focusing more on prodromal symptoms, which are early symptoms that appear before movement-related difficulties begin.

How Parkinsons Disease Is Diagnosed

Diagnosing Parkinsons disease can be complicated because there isnt a specific blood test or screening test that can determine whether or not you have it.

Instead, Parkinsons is diagnosed clinically, which means a doctor will examine you, review your symptoms and medical history, and diagnose accordingly.

Parkinsons disease is a neurological condition that can make movement difficult. If your general practitioner thinks you might have Parkinsons, they may refer you to a neurologist who specializes in movement disorders for a diagnosis.

It can be challenging to catch Parkinsons in the early stages because the symptoms may be too mild to notice or meet the diagnostic criteria. Also, early Parkinsons symptoms are often mistaken for typical signs of aging.

Don’t Miss: How To Use Hemp Oil For Parkinson’s

Who Should Consider A Genetic Test For Parkinsons

There are two groups of people who might consider getting genetic testing and we will discuss each group separately.

What Are The Symptoms Of Parkinson’s Disease

The main symptoms of Parkinson’s disease are:

The symptoms of Parkinson’s disease vary from person to person as well as over time. Some people also experience:

The potential blood test is “not ready for prime time,” Parkinson’s disease experts said. But, it marks progress in the quest for an objective way to diagnose Parkinson’s and similar conditions known as atypical parkinsonian disorders, they noted.

Parkinson’s disease is a movement disorder that affects nearly 1 million people in the United States alone, according to the Parkinson’s Disease Foundation.

The root cause is unclear, but as the disease progresses, the brain loses cells that produce dopamine — a chemical that regulates movement. As a result, people suffer symptoms such as tremors, stiff limbs, and balance and coordination problems that gradually worsen over time.

Right now, there is no blood test, brain scan or other objective measure that can definitively diagnose Parkinson’s, said James Beck, vice president of scientific affairs for the Parkinson’s Disease Foundation.

“In general, Parkinson’s disease is diagnosed with a clinical exam,” Beck explained.

The best person to make that call is a neurologist with expertise in movement disorders, according to Beck.

“But,” he said, “even highly trained doctors initially get it wrong about 10 percent of the time.”

What Part Of The Body Does Parkinson’s Affect

Can Someone With Parkinson’s Get Long Term Care Insurance

What Are The Symptoms To Parkinson’s Disease

What Are The Side Effects Of Parkinson’s Medication