Researchers at Penn State evaluated whether statin drugs were protective against Parkinsons or if these drugs could accelerate its development.

The study, published in the journal Movement Disorders, analyzed data of insurance claims for more than 50 million people. Of those, nearly 22,000 had Parkinsons disease . They also evaluated which patients had been taking a statin and for how long before Parkinsons symptoms appeared.

The researchers discovered that prior statin use was associated with higher risk of Parkinsons. And the risk was more pronounced during the start of the drug use. Neurology professor and one of the authors of the study, Dr. Xuemei Huang said:

Statin use was associated with higher, not lower, Parkinsons disease risk, and the association was more noticeable for lipophilic statins, an observation inconsistent with the current hypothesis that these statins protect nerve cells. In addition, this association was most robust for use of statins less than two and a half years, suggesting that statins may facilitate the onset of Parkinsons disease.

With the results of this large-scale study showing that artificially lowering cholesterol can induce Parkinsons, it seems intuitive that higher cholesterol levels might actually protect against the disease.

And thats exactly what researchers at Tel Aviv University found

Researchers tracked participants statin use, as well as whether they used low-, medium- or high-intensity statins . Participants were considered to show signs of parkinsonism if they had at least two of the following signs: tremor, or involuntary shaking bradykinesia, or slowness in movement rigidity, or stiffness in the hands, legs or neck and parkinsonian gait, a decline in balance while walking or when standing up.

Us Researchers Say Statins May Speed Up Parkinsons In Susceptible Patients

A new study suggests that the use of statins is associated with a higher risk of developing symptoms of Parkinsons disease.

Taking statins may speed up the onset of Parkinsons disease in people who are susceptible, say researchers in the United States.

Using data from a large health insurance database, researchers matched 2,322 patients with newly diagnosed Parkinsons disease with an equal number of individuals without the disease but who were the same age and gender.

They then identified which patients were taking a statin and how long they took them before developing symptoms of Parkinsons.

The results showed that use of statins was associated with a higher risk of Parkinsons disease contradicting some other research showing a lower risk or no risk at all, the researchers noted.

They also found that the association between statin use and Parkinsons was most pronounced in the initial phase of cholesterol-lowering treatment, suggesting that the drugs may facilitate the onset of preclinical Parkinsons disease.

There also appeared to be a difference with type of statin, with an odds ratio of 1.58 for lipophilic compared with 1.19 for hydrophilic statins.

Taking statins increased the chances of Parkinsons disease by 95% overall and the increased risk for the first year of taking statins was 82%, compared with 75% for a year to two and a half years and 37% for longer than that.

You May Like: What To Know About Parkinson’s Disease

How To Optimize Your Cholesterol Levels For Better Health

If you love to eat grass-fed beef, pastured butter, eggs, bacon and seafood as much as I do, I have some great news

Healthy cholesterol is made of large, fluffy beach ballparticles. Because of their large size, this type of cholesterol particle is not linked with increased risk for cardiovascular disease. On the contrary people with large cholesterol particles are at even lower risk of heart disease than people who have low total cholesterol!

Along with large particles of cholesterol, you also want your cholesterol to be protected from oxidation . Your cholesterol can be oxidized primarily by consuming excess sugar and omega-6 fats like those found in seed and industrial oils .

To prevent Parkinsons disease, follow the wisdom of our ancestors:

And beware of pharmaceuticals, which often have irreversible, unintended consequences!

Association Of Statin Use With Parkinson’s Disease: Doseresponse Relationship 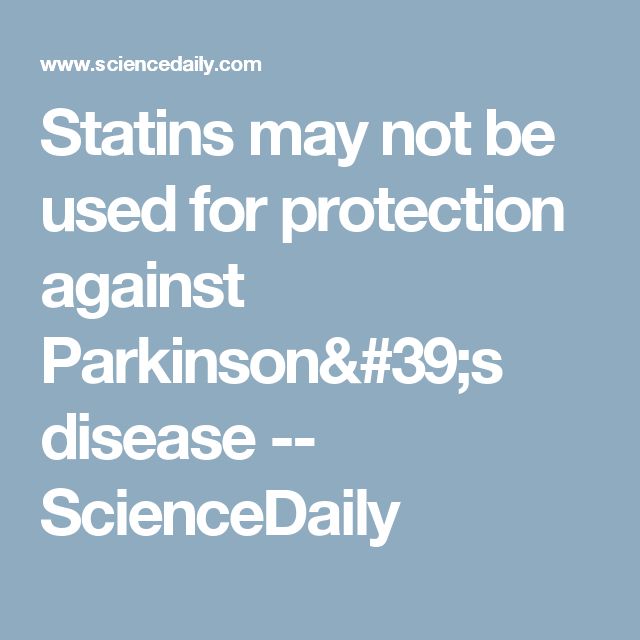 You May Like: What Is One Of The Main Symptoms Of Parkinson’s Disease

Statin Use And The Risk Of Parkinson’s Disease: An Updated Meta

The defined stopping criteria for the discontinuation of trial medication are:

Also Check: How You Get Parkinson’s Disease

Benefits Of Improving Cholesterol Homeostasis In Other Diseases

In addition to ASCVD, cholesterol metabolic disorders are also involved in the pathogenesis of other diseases and cholesterol lowering can ameliorate them. Interestingly, improving cholesterol homeostasis may be beneficial to several diseases even the role of cholesterol in these diseases remains unclear.

NAFLD is a chronic liver disease caused by excessive lipid deposition in liver cells without significant alcohol intake. NAFLD includes nonalcoholic fatty liver and nonalcoholic steatohepatitis . The accumulation of FC in the liver is also relevant to the pathogenesis of NAFLD., Epidemiological studies have found that intake of excess dietary cholesterol significantly increases the risk of NAFL and NASH., A study of lipidomic analysis of liver biopsies from patients with NAFLD showed that hepatic FC level was positively correlated to the severity of liver histopathology. Animal studies also showed that exogenous induction of FC accumulation in the liver can promote the progression of NAFL to NASH.,

In NAFLD, hepatic cholesterol homeostasis is imbalanced, resulting in elevated levels of hepatic cholesterol. This dysregulation may involve multiple metabolic pathways, including activation of cholesterol biosynthetic pathway , and cholesterol de-esterification , and reduced cholesterol export and BA synthesis .,,, However, the contributions of these pathways to NAFLD need to be further explored.

Higher Total And Ldl Cholesterol May Protect Against Parkinsons

To explore the association between high cholesterol levels and Parkinsons risk, researchers reviewed the clinical records of more than a quarter million patient records, collected from medical databases in Israel.

The study included patients aged 40 79, who did not receive statins. During the study period, 746 patients were diagnosed with Parkinsons disease.

At the beginning of the study, total cholesterol and LDL-C levels were similar among men and women . Roughly one-third of the participants had LDL-C levels above 140 mg/dL the level at which statin therapy is typically recommended.

In women ages 70 to 74, researchers found a similar protective association . Higher total cholesterol levels were linked to a reduced risk of up to 7%, and high LDL-C levels correlated with a 2-12% reduced risk of Parkinsons.

And as to that last statement, we couldnt agree more!

You May Like: How Is Parkinson Disease Currently Treated

CHICAGO Statins, the common drug taken to help lower cholesterol, could also slash the risk of Parkinsons disease by more than 15 percent, according to a new study. Researchers at Rush University in Chicago say the medication may protect older people from brain disorders, as well as reducing the chances of them suffering a heart attack or stroke.

There are more than 137,000 people living with Parkinsons disease and other brain disorders which can cause severe movement problems. These conditions, known collectively as parkinsonism, affect around one in 500 people, with symptoms like tremors and stiffness usually starting to show after the age of 50.

Now scientists are saying statins could be a simple way for people to tip the odds in their favor.

Our results suggest people using statins may have a lower risk of parkinsonism and that may be partly caused by the protective effect statins may have on arteries in the brain, says study author Dr. Shahram Oveisgharan in a statement. Our results are exciting, because movement problems in older adults that come under the umbrella of parkinsonism are common, often debilitating and generally untreatable.

After on average six years, around 50 percent of people had developed at least two of these symptoms. But just 45 percent of the 936 people taking statins showed signs of Parkinsons compared to 53 per cent of those who didnt.

The findings are published in the online issue of the journal Neurology.

MethodsWe performed a retrospective case-control analysis. First, we identified 2322 incident PD cases having a minimum of 2.5 years of continuous enrollment prior to earliest diagnosis code or prescription of antiparkinson medication. A total of 2322 controls were then matched individually by age, gender, and a follow-up window to explore the relationship of statin use with incident PD.

ResultsStatin usage was significantly associated with PD risk, with the strongest associations being for lipophilic versus hydrophilic statins, statins plus nonstatins , and for the initial period after starting statins .

The use of statin was associated with higher risk of PD, and the stronger association in initial use suggests a facilitating effect. © 2017 International Parkinson and Movement Disorder Society

Don’t Miss: How Do I Know If I Have Parkinson’s Disease

Older Adults On Statins May Have Lower Risk Of Parkinsonism

Newswise Older adults who take statin drugs for cholesterol may have a reduced risk of developing parkinsonism, a neurological condition that causes movement issues such as tremor, according to a recent study by researchers at Rush University Medical Center.

The research is published in the March 23 online issue of Neurology, the medical journal of the American Academy of Neurology.

Statins reduce plaques in the arteries that is formed by too much cholesterol found in the blood. This study shows that those who are using these drugs may have a lower risk of parkinsonism and it may be caused by a protective effect that statins may have on arteries in the brain, said Dr. Shahram Oveisgharan, study author and assistant professor in the Department of Neurological Sciences at Rush University Medical Center.

Movement problems in older adults are common and often debilitating and generally untreatable. If statins can decrease the risk of people developing parkinsonism movement disorders, that could be good news for the 60,000 people who develop them. 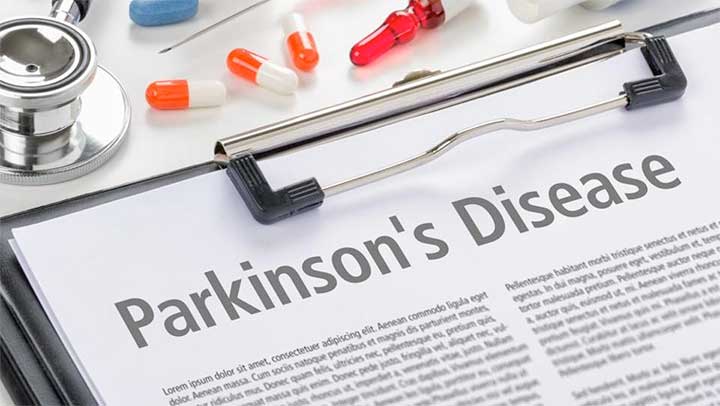 Don’t Miss: What Are The End Stages Of Parkinson’s Disease

Statins are a class of drugs commonly prescribed to lower cholesterol and prevent severe illness from cardiovascular disease. New research indicates they may also help people with signs of parkinsonism.

Statins reduce plaques in the arteries that are formed by too much cholesterol found in the blood. This study shows that those who are using these drugs may have a lower risk of parkinsonism, and it may be caused by a protective effect that statins may have on arteries in the brain, said Dr. Shahram Oveisgharan, study author and assistant professor in the Department of Neurological Sciences at Rush University Medical Center.

The study followed 2,871 people for an average of six years, 936 of whom were taking statins at the time. Participants were part of the Rush Alzheimers Disease Centers Memory and Aging Project, Religious Orders Study and Minority Aging Research Study. All three studies are decades-long efforts that recruit participants to undergo annual testing, sample collection and organ donation after their death.

Recommended Reading: How Does Parkinson’s Disease Affect The Brain

Relevant conflicts of interest/financial disclosures: : Nothing to report.

How Does Parkinson’s Make You Feel

Can An Emg Diagnose Parkinson’s

Can An Emg Diagnose Parkinson’s